Something not seen everyday 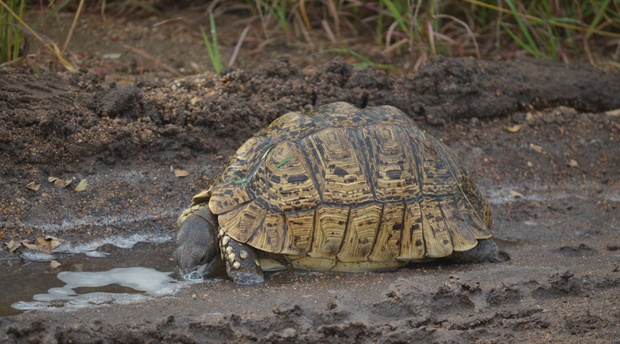 A few months ago, in May, I was very fortunate to have witnessed, along with guests, a very special sighting. It wasn’t the typical leopard kill, or being the first to spot new-born cubs, but it was just as exciting and rare.

Fulfilling guests’ expectations of their game drives is not easy - there is that man named Murphy who governs all outcomes, and always seems to find a way to make it hard for guides, but going out with an attitude of “let’s see what we see, and be happy just to be immersed in nature” seems to yield the best results. Something to do with mind-set, positive thinking produces positive results. This attitude means you are open to seeing more than the “Big 5”, and it will keep you humble because you will be continually learning from the new things you see. But I digress - back to our particular game drive.

It was getting dark and we were heading back to camp, when I spotted a leopard tortoise on the verge of the road. It wasn’t the first leopard tortoise we had seen this trip, but I stopped nevertheless because this one was laying eggs! This is not a common sight with tortoises, unlike their salt-water relatives, the turtles, and we watched in amazement for about 20 minutes. Then, not wanting the noise of the vehicle to disturb the tortoise in her vulnerable state, and possibly causing her to abort her efforts, I asked the guests if they would help me quietly push the vehicle past her so as not to frighten her.  Our mandate is to try to impact nature as little as possible, to “take only pictures and leave only footprints.” The guests willingly pushed.

The leopard tortoise is the largest tortoise in South Africa and the fourth largest tortoise in the world. It derives its name from the beautiful patterns on its shell, or carapace, resembling those of it’s feline namesake. The older the tortoise gets, the less colourful it becomes, in time turning a drab brown. It can reach a maximum weight of up to 40Kg, but generally weighs between 10 and 15 kg. The physical difference between the male and female mostly relate to mechanics involved in mating. Because of the difficulty in obtaining a purchase on the large shell of the female, the male tortoise has a shell that is concave underneath, thus fitting the shape of the female’s back. Females have a flat under-shell, allowing more space for developing eggs.

To make a burrow for the eggs, the female moistens the soil from urine contained in a sac called a bursa. This sac is the reason tortoises should not be picked up in dry season, as the animal relies on this reservoir during tough times.  When picked up, they may release this liquid in an attempt to deter the “predator” and then will subsequently perish, as it won’t be able to survive a dry period.

The female lays about a dozen eggs at a time and can lay five clutches at monthly intervals. The leopard tortoise has one of the longest incubation times of any tortoise. The eggs laid just before Winter can hatch in about 10 months, and the later clutches can take up to 15 months to hatch, lying dormant until the temperature rises again. An interesting thing about the eggs is that those incubated at high temperatures will hatch as females and those at lower temperatures will be males. In an age of global warming, we may face times when too many females will be born, resulting in a population drop in some areas. However, they can live for up to 100 years, so we still have a little time to address the climate change crisis. Other species may unfortunately not have this grace period.
On inspecting our tortoise’s burrow some weeks later, my hopes of patiently filming the burrow 15 months down the line slipped away when I found a mongoose had dug up some of the eggs. Not all, but some. As the days went by the burrow was raided and the eggs disappeared one by one.
The statistics for survival of tortoise young is on average, one in 100 reaching adulthood. If about 5 clutches are laid in a year, containing usually about 12 eggs per clutch, it seems only one tortoise will survive per mother every two years. Not the best odds, but they are so long lived, it sort of evens out.
Of course, it could be that in laying eggs on the side of a road, and not deeper in the bush, might have reduced the chances of this particular clutch surviving.
We wish her better luck next time – but I wonder if I will ever be in the right place at the right time again to be a witness?

As that great naturalist Pliny the Elder said “ex Africa semper aliquid novi” I say – most especially in game guiding. 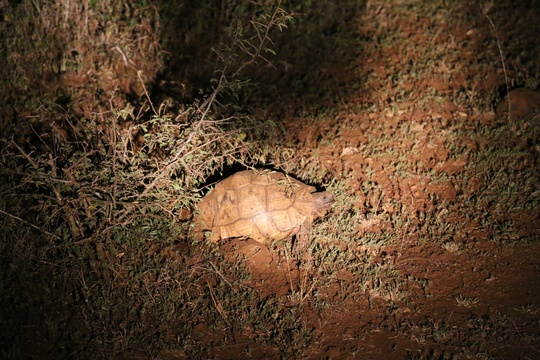 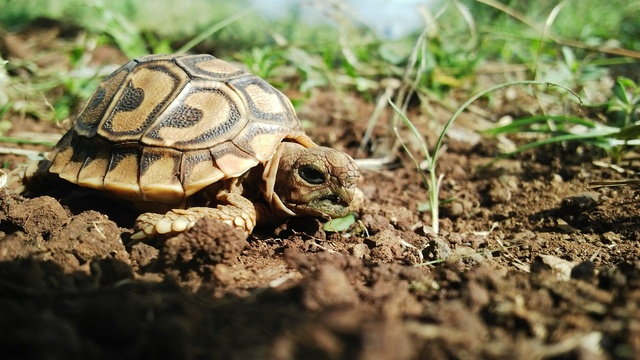 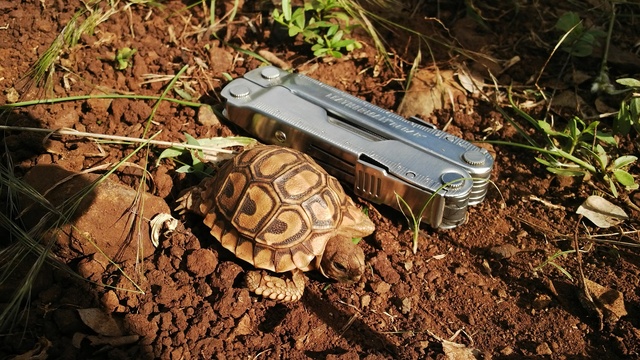 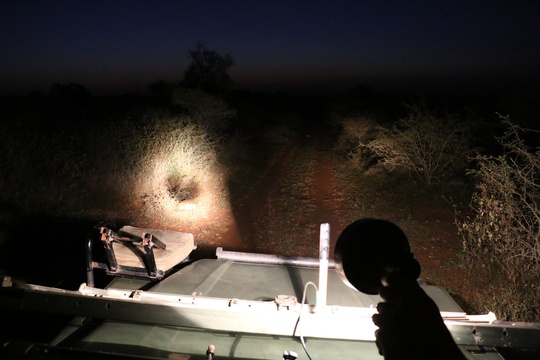 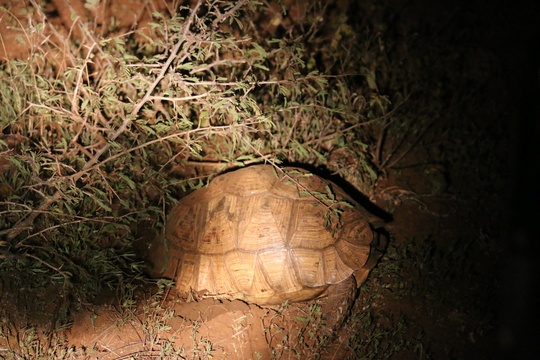 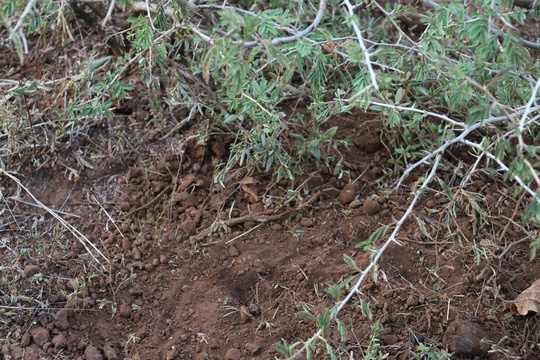 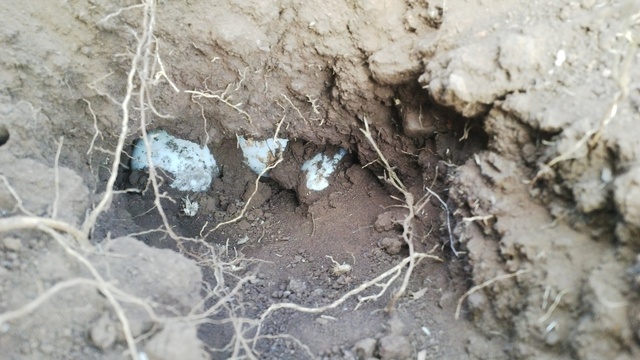 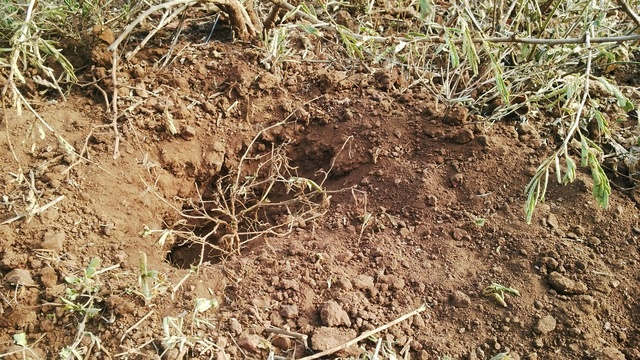 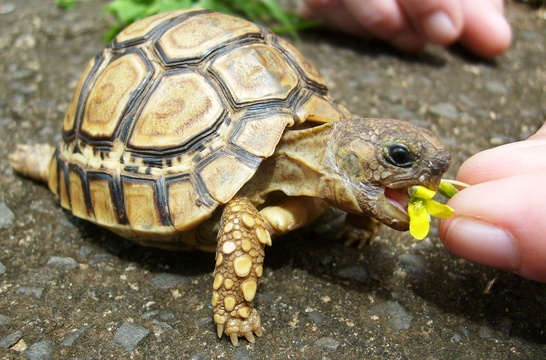 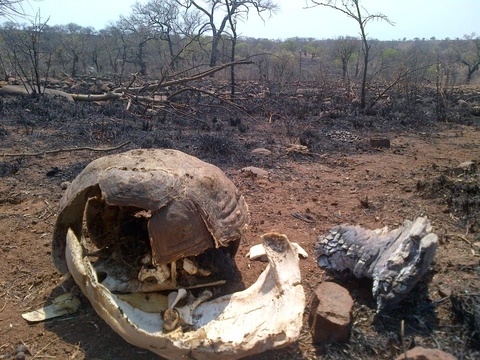 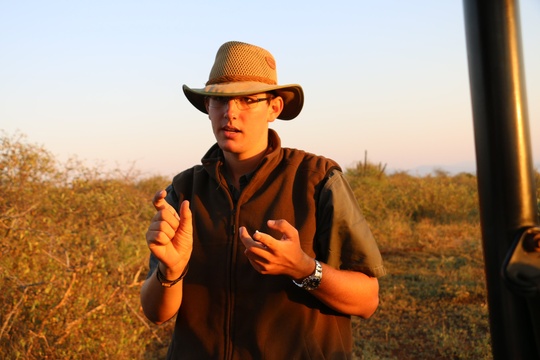