A TRIBUTE TO TWO GREAT CONSERVATION CHARACTERS AND A LAND ROVER

A TRIBUTE TO TWO GREAT CONSERVATION CHARACTERS AND A LAND ROVER – On the 23rd of July the Kingsley Holgate Foundation headed to the shores of Lake Jozini in Zululand for a rather special event: the ceremonial ‘planting’ of an old Land Rover Defender, which spent 30 years helping to conserve rhinos and elephants in Africa, and paying tribute to her owners, the extraordinary brother and sister team of Blythe Loutit and Digs Pascoe.

Nicknamed ‘Blythe the Bhejane’, she was driven from England across Africa to Namibia in 1988 and given to Blythe as a gift, to be used for her work in the Save the Rhino Trust. Blythe was a legend in Namibian wildlife circles; during the Border War in northern Namibia and southern Angola, she courageously took on the might of the South African military, including colonels, generals and influential politicians, who were illegally hunting elephants and the critically endangered desert black rhino at the time. Unconventionally, Blythe also enlisted the help of tribal chiefs, news media, miners, geologists and even soldiers, and appointed rehabilitated poachers as game guards. She involved village communities, badgered government officials and set up community tourism programmes. Blythe deservedly won the prestigious IUCN Survival Award for Conservation of an Endangered Species in 1992 and together with her friend Ina Britz (co-founder of Save the Rhino Trust Namibia), is still today credited with saving the desert black rhino from extinction.

After Blythe’s death in 2005, her brother Digs went to Namibia and drove the battered old Defender nearly 3,000Km back to Zululand. As unconventional and as serious about conservation as his sister, Digs particularly loved elephants. He established the Space the Elephants Foundation and together with Dr Heinz Kohrs from White Elephant Safaris, dedicated much of his life to the elephants of Pongola and Jozini.

Digs joined us on many an expedition; he once arrived with a single tin of pilchards and half-loaf of bread for a journey that lasted 38 days! In Mana Pools, we found him sitting alone on the banks of the great Zambezi River, his back against an Acacia Albida tree making elephant rumbling sounds, as hundreds of elephants surrounded him on their way to the river to drink. A few years ago, we gave him the honour of christening ‘Mashozi’, our new Defender 130, at the Land Rover Jamboree; he smashed the champagne bottle against the bull-bar so hard that shards of glass flew in all directions and slashed a big cut on the arm of Land Rover International’s MD. ‘Wear that scar with pride – it’s for our rhinos!’ he famously shouted, as we rushed to stop the bleeding. That Defender was quickly covered from axle to roof-rack and from bonnet to tailgate in hundreds of messages of support for rhinos and became a powerful, moving billboard against rhino poaching. Digs was also one of the founders of our Rhino and Elephant Art educational programme that’s now reached over 600,000 kids throughout Africa and beyond.

Zulus have a unique art of giving people uncannily accurate nicknames that are often insights to their soul. In Dig’s case, it was ‘Yandlulindlovu’ — ‘Let the elephants pass’. Digs passed away on 24 July 2018, but his legacy and indomitable spirit live on in the many lives he touched in this special part of Zululand – human, rhino and elephant.

We’re convinced that Digs’ spirit was with us this past weekend. When Ricky Sparks (Empangeni’s legendary LandyMan) who’d been storing ‘Blythe the Bhejane’ at his Land Rover workshop told us that he had a gap last Friday afternoon to tow the old Landy to White Elephant Safaris for its ‘planting’ outside Digs’ eclectic museum of all-sorts known as The Loose Mongoose – which galvanised us into action – we didn’t realise that, by some strange quirk of fate, Saturday 24 July was the anniversary of Digs’ death.

And how can you explain – when Dr Heinz Kohrs went to start his beautifully restored 1958 Series 1 to join the Landy Tribute Convoy that would accompany ‘Blythe’ to her final resting place, he was delayed because a little banded mongoose had somehow managed to get itself wedged in the engine? He carefully eased it out and it scampered off – a true ‘loose mongoose’!

And finally, as we were building an ‘iSivivane’ (stone cairn) in tribute to Blythe, Digs and their Landy and as a memorial to their beloved rhinos and elephants, the most beautiful and unexpected rainbow appeared in the skies above.

Dr Heinz said it best: “It’s wonderful that this special Land Rover’s final resting place is here in Digs’ old stomping ground within the oldest game reserve in Africa, right where she belongs on the shores of Lake Jozini below the majestic Lubombo Mountains, where elephants and rhinos still roam.”

A big thank you to everyone took part in this special tribute, especially Ricky Sparks, Digs’ grandson Jean-Michel and son-in-law Pierre Delvaux, Casper Strydom (White Elephant’s resident Landy mechanic who got ‘Blythe’ going for her final drive), his wife Vicky and 2-year-old Tobias (who loved pretending to drive ‘Blythe’), Richard ‘Mahlembehlembe’ Mabanga, Grant Fowlds and Dr Heinz and his family.

If you’re ever in the Lake Jozini area, go stay at White Elephant Safaris on Pongola Game Reserve (a great bush-break, even with tiger fishing) and visit ‘Blythe the Bhejane’. On the track that leads to The Loose Mongoose, you’ll see the iSivivane; so spit on a stone to propitiate the spirits and add it to the pile, in memory of two great conservationists and their old Defender, who did so much for Africa’s rhinos and elephants.

Thanks to Casper Strydom for the moving video tribute and the Kingsley Holgate Foundation for the story.

You can view the tribute video in the gallery 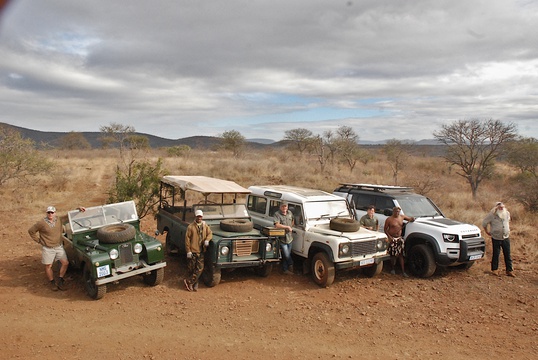 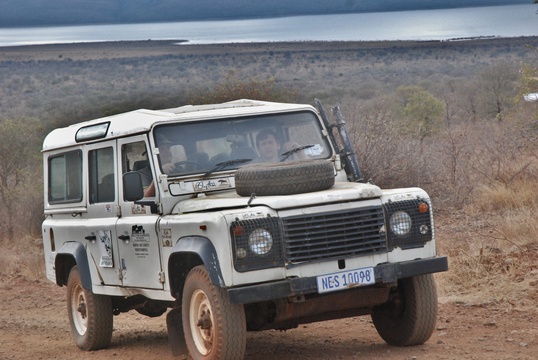 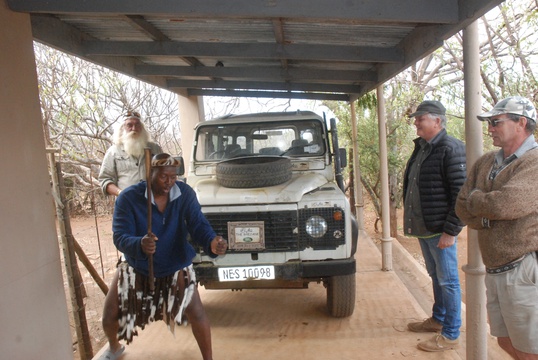 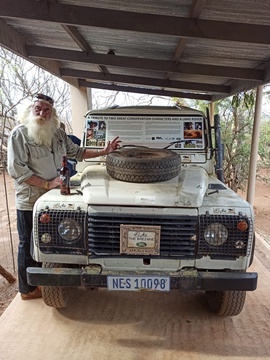 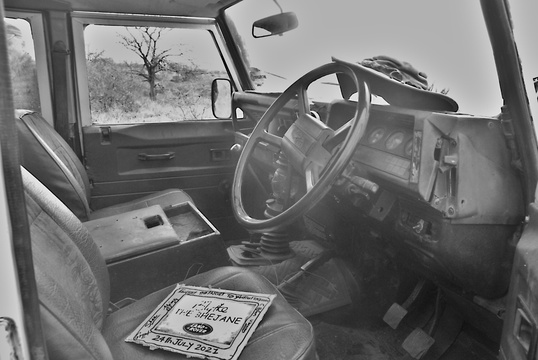 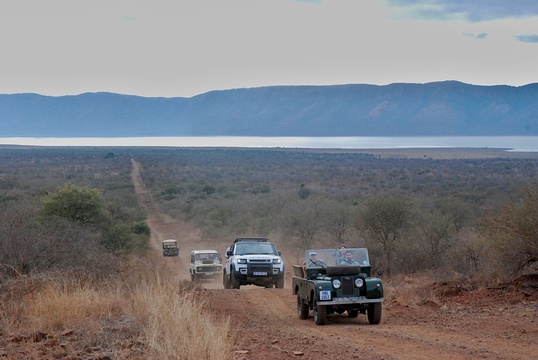 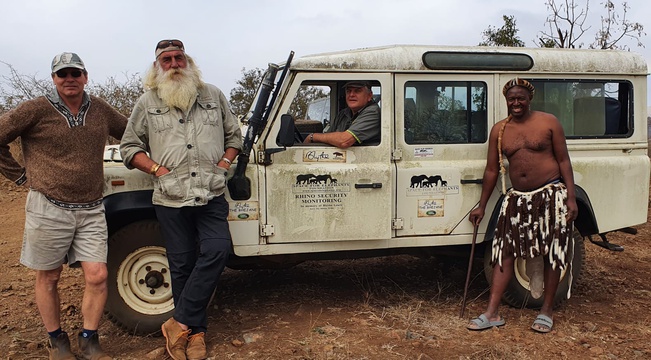 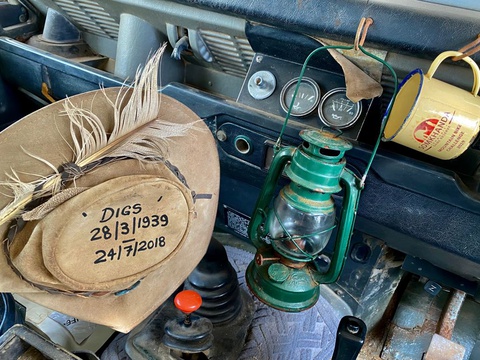 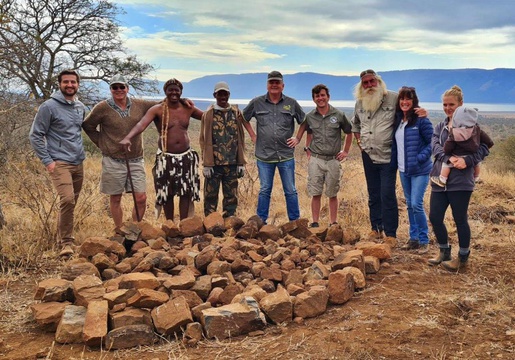 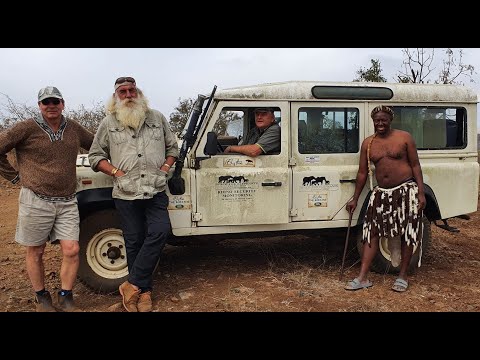