A Game Drive with Luke Abbot 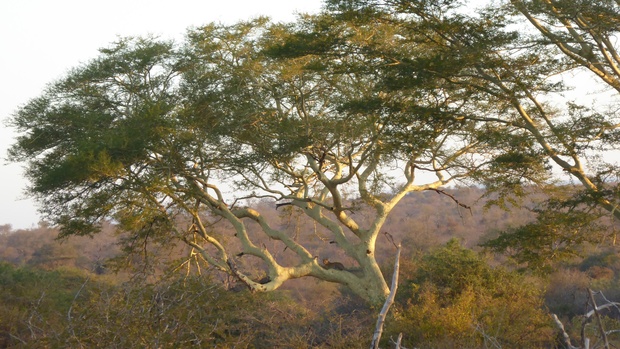 Being the only two guests in the lodge, Dusica and Stefano were lucky to have everything to themselves… Arriving early on Friday the 13th of June, they had plenty time to relax before heading out on a game drive. After high tea we left the lodge at 3:00 pm sharp (the earlier you leave the better as you have more chance to see more and spend more time in the bush!)
“It’s winter now and the bush is very dry, so the animals need to travel further in search of water and food…” I explain as I prepare them for the possibility of not seeing anything. I reassure them that there might be a chance as the animals congregate around waterholes and the Jozini Dam, ergo let’s head that way!

Believe it or not, but the very first animal we saw was not the usual warthog, (a high chance, I might add, as we have an over population of 900,….. or impala, but the critically endangered, highly sought after black rhino!  It was a young male out in the open. I stop the vehicle about 200metres away, and inform Dusica and Stefano about the black rhino. They could not yet see it, as it was well hidden and could just as well be a large rock, (but to the trained eye it’s a rock with two spears on its head.)
We then slowly drift downhill with the engine off so as not to alert him of our presence, as black rhino are renowned for being skittish or aggressive. The wind was in our favour so he could not smell us. We managed to get within 30 meters of him and our approach was so stealthy that he actually fell asleep within about 15 minutes of us watching him, a perfect time to move on and leave him to rest in peace.

All this action and its only been 20 minutes! We make our way through my favourite spot on the reserve- the fever tree forest. These trees are very attractive - their colour, shape and the way the light fades through the leaves…. Truly distinctive.

Suddenly, I hear a sharp call… I recognise it immediately and play the same call on my phone to get its’ makers’ attention. This works well and it flies right over the vehicle and into a tree a few paces away. We leave the vehicle after I’ve made sure the coast is all clear, I lead them to the tree it’s perched in… A Pearl Spotted Owlet - the smallest diurnal owl in Southern Africa, and it’s probably out looking for its next meal.

A moment later more owls start calling, and it flies off, but the tree it was in is another one of Africa’s iconic trees- the umbrella thorn acacia…. its’ shape made more definitive by the browsing of giraffe. We head back to the vehicle and drive another 10 meters and I detect a shape in another fever tree! It can’t be! I stop and take a better look and the shape looks back at me……the most elusive of the big 5 in a most beautiful tree almost made to suit. A young leopard cub of about 1 years old is sitting, as relaxed as can be, while Dusica, Stefano and myself look on. We are the only three people on Earth looking at this leopard. As we had been careful not to disturb it in any way, it was completely relaxed and it started playing, running up and down the tree, stretching, and even chasing its tail! We watched it for just over an hour, and with the setting sun and rising full moon it was time for sundowners.

I moved the vehicle just out of sight of the leopard and we enjoyed the last rays of sun hitting the Lebombo Mountains and the Jozini dam.

On the way back the leopard had moved from its tree and was nowhere to be seen. We saw guineafowl flying into trees and then we saw eyes. It was the same cub but now that it was darker it must be trying to do what cats do, hunt. On the way to the tree full of guineafowls it bumped into a group of passing nyala. I didn’t shine on the leopard as the nyala would see it but even the slightest light was enough and the alarm bark sounded. Immediately the stalk pose changed into a relaxed one and it walked towards the vehicle. Then it changed its mind and walked into the bushes out of sight. A few hundred yards later we saw it again trying to cross the road and it decided to cross behind us instead.

What a day! We never thought that Friday the 13th would end up being quite so spectacular! 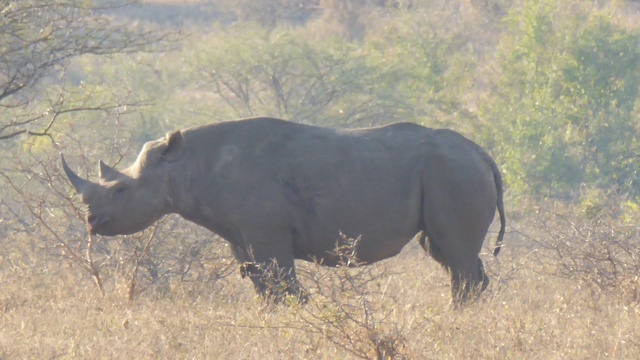 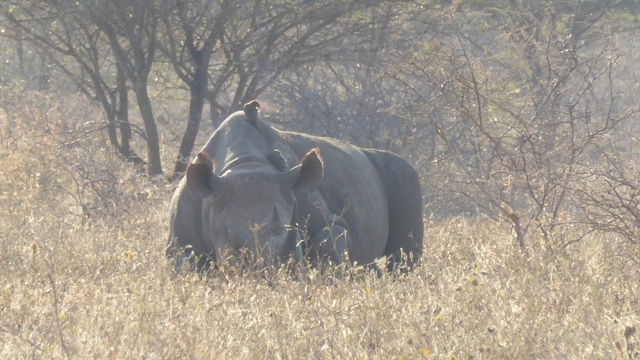 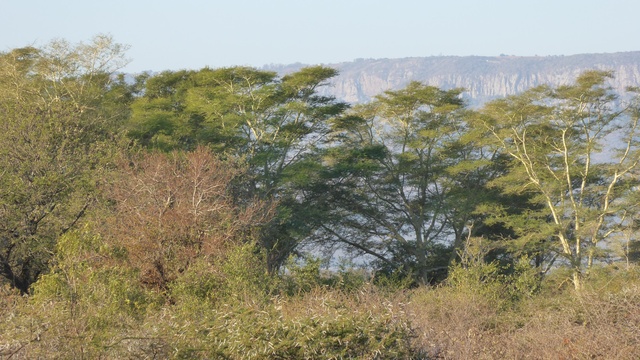 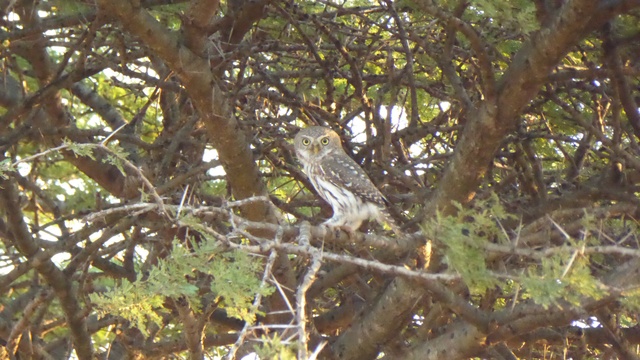 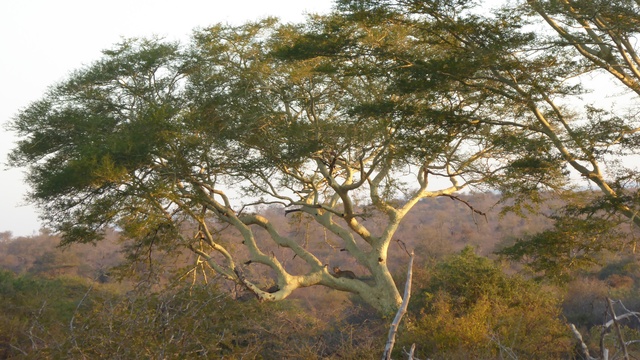 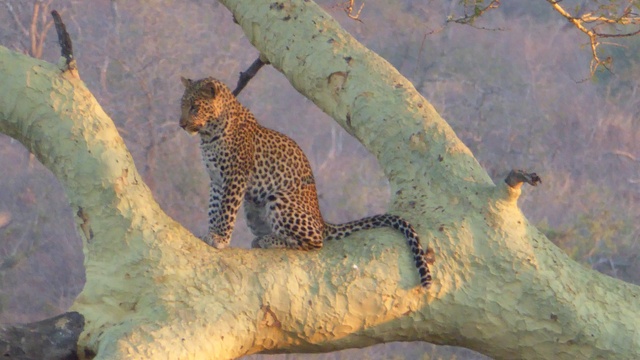 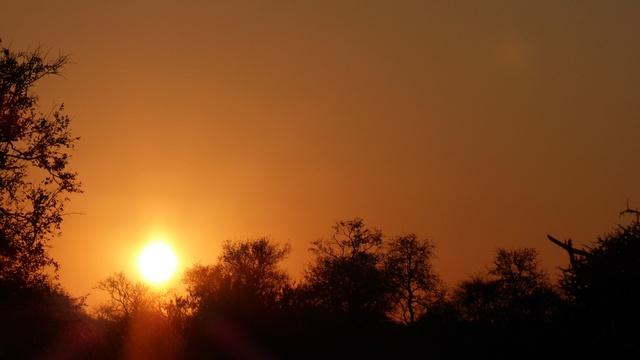 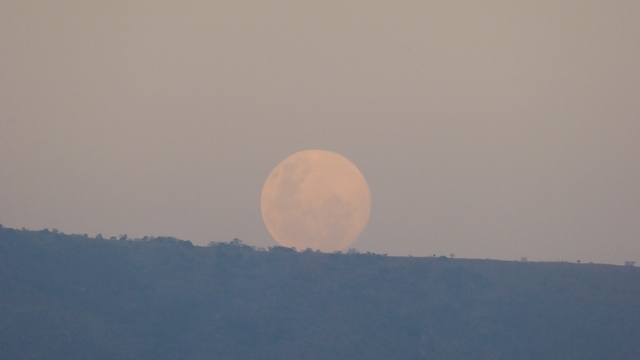 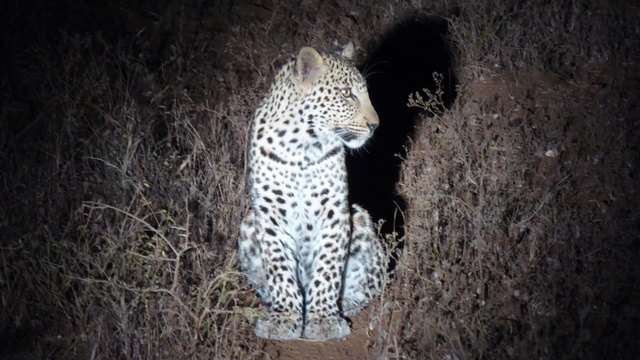