Posted by Heike on Fri September 19, 2014 in White Elephant Wildlife. 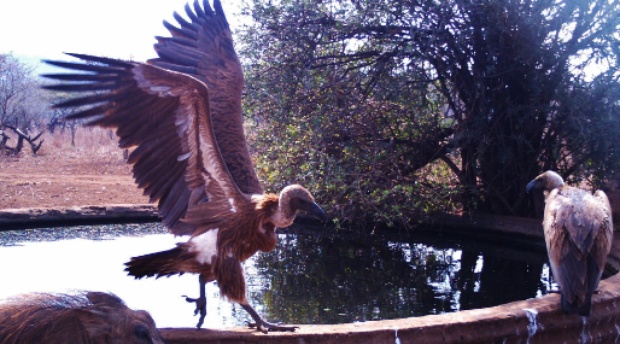 Every year on the first Saturday of September White Elephant takes part in the Vulture Count Day that was initiated by Ezemvelo KwaZulu-Natal Wildlife in 2003.

The Vulture Awareness Day takes place on the same day worldwide and bird enthusiasts are encouraged to take part in helping to conserve this important species!
All effort goes into the conservation and therefore the preservation of our vulture population species as they are an integral part of our ecosystem.

Vulture numbers have been declining rapidly due to a range of threats in many areas that they occur such as habitat loss, poisoning, collisions with vehicles and electrical equipment and poaching.

In an effort to recreate an area where vultures are able thrive again and prevent the fast decline in certain species and numbers, White Elephant on Pongola Game Reserve (as well as on many other Reserves nationwide) has set up a specific site for vultures called a 'Vulture Restaurant' many years ago. Vulture Restaurants are places where fresh and poison-free meat and/or carcasses of wild mammals are put out for these vultures and other scavengers. Feeding vultures at vulture restaurants can contribute to the survival of these birds, especially during periods of food scarcity and when young birds fledge. It is an area of open veld where the vultures can easily land and take off without interference. It is best placed out of sight of roads or human traffic so that the vultures can feed without disturbance.

So Saturday the 6th of September, was the day marked for counting the vultures that came to our vulture restaurant to feed on carcasses we had put out for them to feed on.
While counting them, I was also required to identify all vultures and other scavenging birds seen at the site between 07h00 and 14h00. The birds also needed to be classified into age classes where possible and details of any marked birds  were to be recorded (see two camera trap images of a White-Backed Vulture as well as Lappet-Faced Vulture, the latter with wing tags). Additionally and in order to reduce the risk of double counting birds at neighbouring sites, I needed to record the time of each observation:

So I got myself settled at a reasonable distance to the site so as not to disturb the birds with my presence and where I could make these observations and counts using my binoculars and a camera.

It was a great day and plenty vultures came to feed at the restaurant including mostly the White-Backed Vultures as well as Lappet-Faced Vultures, Marabou Storks, Pied Crows and one Tawny Eagle.
Even a Black-Backed Jackal came along to snatch a piece of meat by trying to enter the mass of vultures bickering and feeding on and around the carcasses (see image).
The feeding frenzy didn't last that long and by 10am two bare skeletons were all that was left. Some of the vultures flew off immediately while others still drank at the reservoir or stayed in the shade of the trees nearby before heading off, possibly in search for another feeding opportunity or to return to their nests.
I also left after having waited a while to see if any vultures would return. None did and that meant for me going back to my desk to complete the Data Collection Sheet that the Coordinators from KZN Wildlife require to be able to analyse this info together with the ones from all other participants in the KZN region. This very valuable information will help vulture experts to monitor the vultures' decline or rise in numbers as well as their movement range.
For more exciting info, please follow this link:
http://www.vultureday.org/2013/Organisation.php?code=816 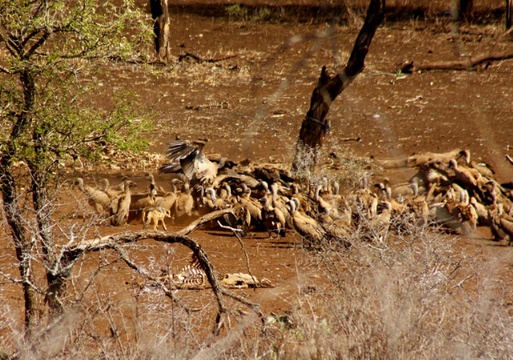 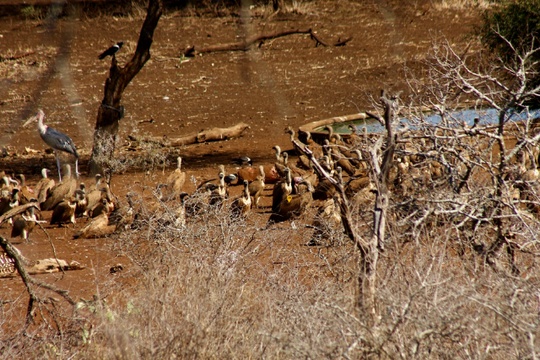 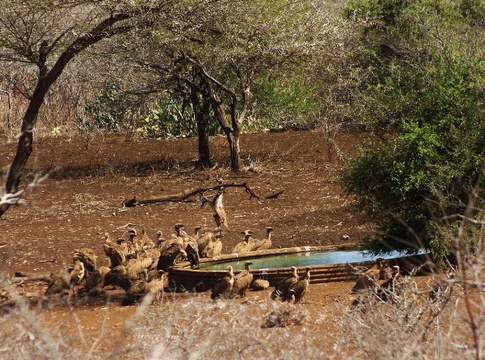 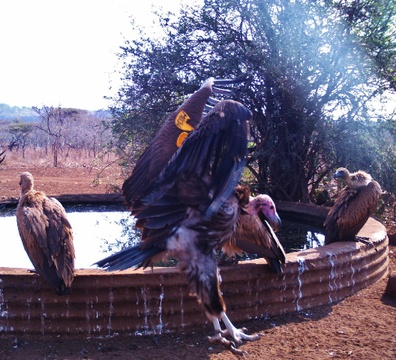