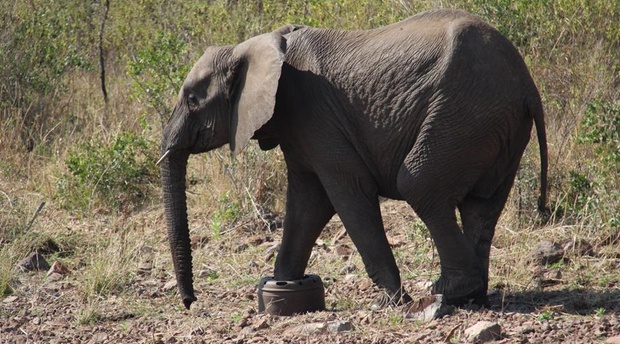 The foreign object that surrounded the elephant’s front right foot was large and appeared to be an old metal truck tyre rim. The elephant was identified as a young individual. Like most youngsters, the little one was curious; it was most likely playing with the tyre rim before it got its foot stuck in it. The metal rim was a heavy burden and was affecting the elephant’s balance. The metal rim had to be removed, as the rim could cause further injury and swelling, maybe even result in a broken leg on the hilly slopes of this Reserve. Heike watched young elephant limp away, and the distinctive clunking sound of the tyre rim could still be heard long after the elephant disappeared from view; from this moment on, the young elephant was to be known as ‘Clunkers’.
As the elephant clunked out of sight, a boat was prepared to go out onto the lake in hopes of getting a better sighting of the herd and seeing Clunkers again. After finding the herd, one could again hear the clunking noise, as 'Clunkers' was catching up with her family. She soon joined the herd, accompanied by an adult female and a young male. Heike identified these as Bonile and her three-year-old calf, Khulani; and the injured elephant was identified as Bonile’s 6 year old daughter named Bee.

The herd became visibly unsettled by the clunking noise that rang out with each step young Bee took. Bee joined the family herd and began to walk among them, and it was then that the other elephants began to exhibit some strange behaviour. Some of the adult females started to push Clunkers-Bee into the water causing a great deal of commotion within the herd. During this time, one could see that Clunkers-Bee had medium temporal gland secretions, indicating that she was experiencing a lot of stress. Whilst she was in the water, she did not drink at all, and in general she attempted to leave the water when the adult females would let her. She struggled to move in the water due to the weight of the metal rim.

Clunkers-Bee was not seen again until Saturday the 26th of July. She was walking alone, following her mother Bonile in relatively close proximity. She was struggling to move properly with the rim on her foot, and she moved down to the water’s edge where she was observed whilst drinking.

It was decided that the removal of the metal rim was going to occur on Wednesday the 30th of July when rhino procedures were planned. So it seemed appropriate that while the vet and helicopter were here, Clunkers could also be 'declunked'. The procedures were carried out by Peter Brothers Veterinary Safaris and his guest team as well as vet and owner of White Elephant, Dr Heinz Kohrs. Dr Peter Brothers is a wildlife vet who lets donors who sponsor the procedures come along and participate in the unique hands-on experience of treating our African wildlife. With the chopper roaring overhead, Bee looked a bit dozy and stood with her ears held forward. A few minutes later, the dart containing the anaesthesia took effect and she fell down onto her side asleep.

Once it was all ok, rangers, students, guests and vets all helped monitor Clunkers’ anaesthesia and worked on removing the metal rim.
The idea for removing the rim came from the Morrison Family’s daughter, Katie, who said to put a plastic bag and thereafter grease around the foot to try and slide it off first rather than go through the long procedure of cutting the metal rim. While some were working on the foot, Peter asked for a few volunteers to go and inject Clunkers in the rump with penicillin and electrolytes, which would make her feel better after she woke up. After a while of working on the foot, they managed to remove the rim, and everyone cheered. Katie’s plan had worked, and Clunkers was finally ‘declunked’.

After treating the wounds on her leg, a radio transmitter collar was fitted around Bee’s neck so that Heike could monitor her after she woke up. After the collar was fitted and all the measurements taken, Peter declared she was fit to be woken up. Everyone cleared out of the area and got back into the vehicles. Peter administered the antidote, and after a few minutes Bee started to wake up. She hauled herself onto her feet and gingerly took her first rim-free steps. Once she realized the rim was gone, she happily ran off into the thicket so that she could return to her family. We were all very happy that she was OK.

She was also named Katie’s Bee as it was Katie’s ingenious idea to use the plastic bags to remove the rim.


On Tuesday 6th of August a group of elephants was spotted standing in the shade of a thicket several hundred metres from the water. Among them was a young elephant with a collar; it was Bee! She seemed to be doing well and was with her family once more.

A very warm and heartfelt thank you goes to the  Peter Brothers Vet Team including the Morris Family; Jackie, Katie and Colin for enabling us to free Katie’s Bee, alias Clunkers foot!
This factual ‘story’ was written by the Dissertation Students of 2014 including Emily Lane as well as Abigail Cowe, Colleen Boyce, Harry Young, Jazmin Creaney, Lucy Chivers, Mara Forbes, Stacey Lewis, and Matt Pennington and contributed to by Dr Heinz Kohrs, Adriaan Crous and Heike Zitzer. 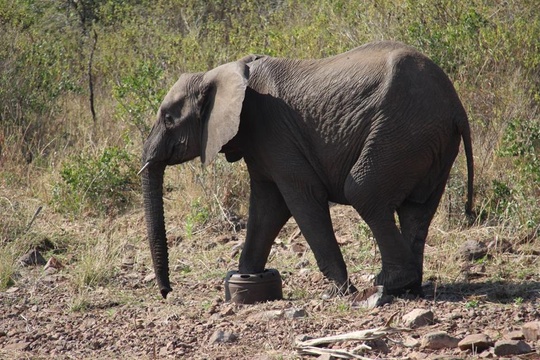 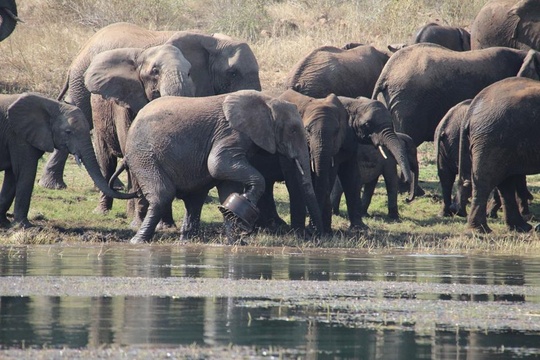 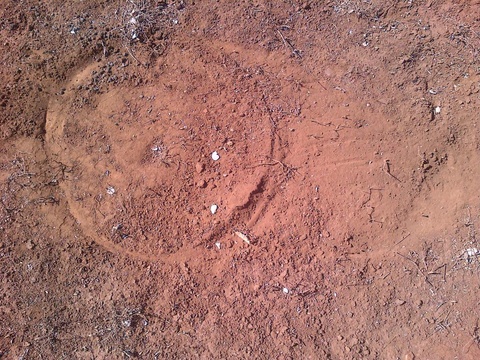 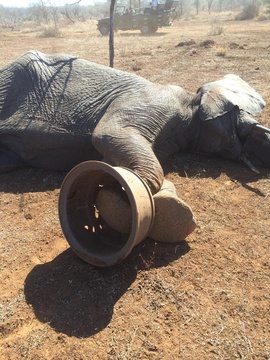 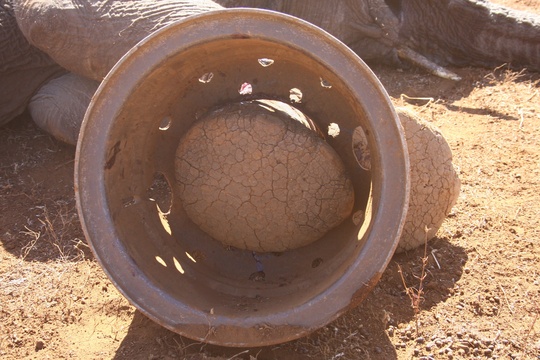 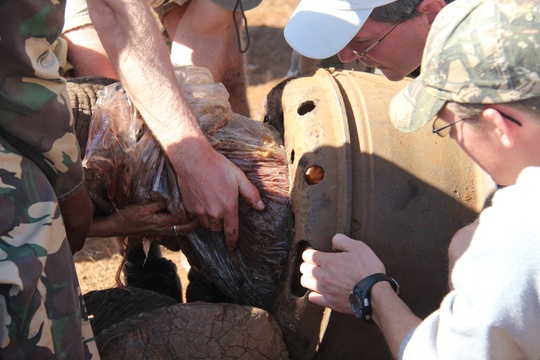 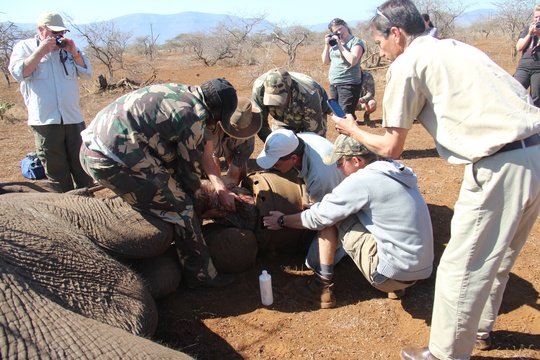 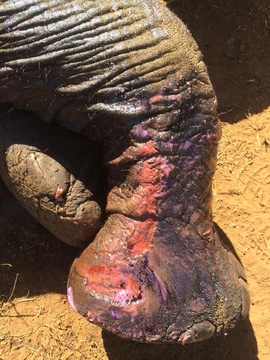 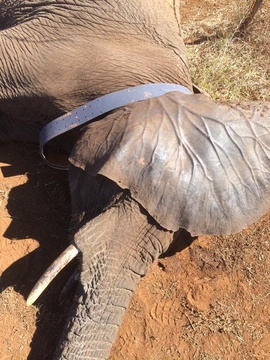 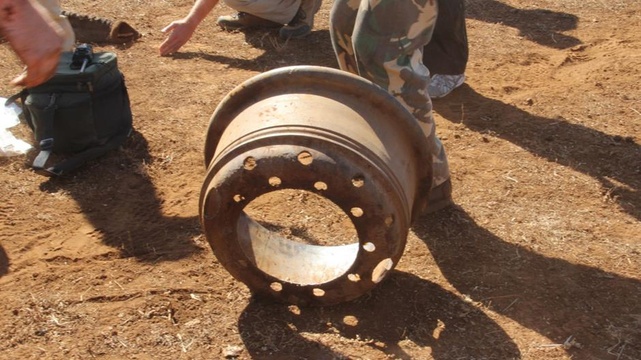 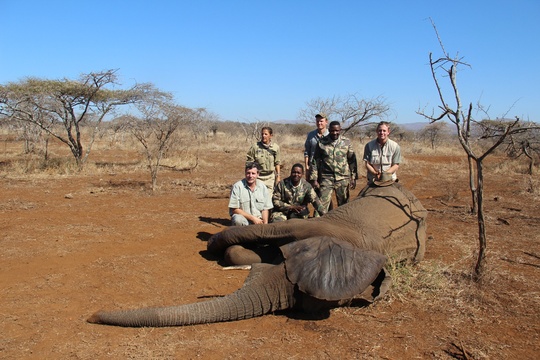 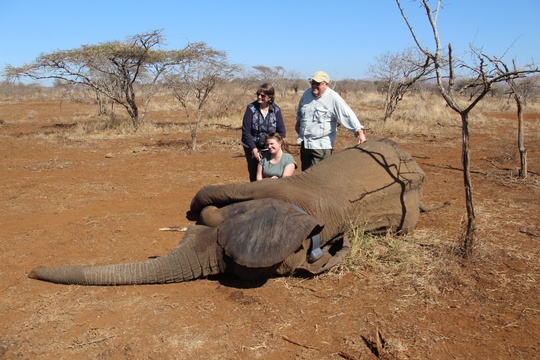 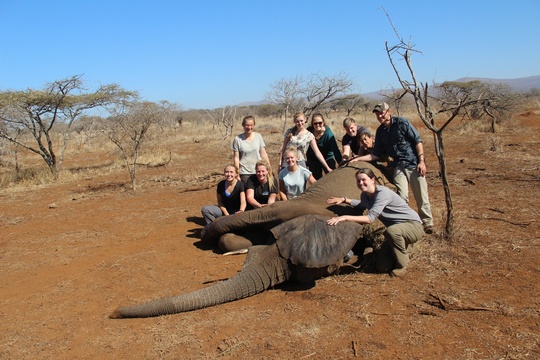